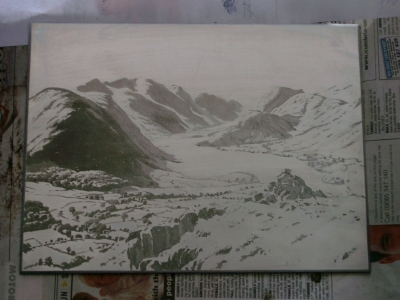 The design painted onto a zinc plate with 'sugarlft' solution. When dry, this is painted all over with a thin layer of 'stopping out' varnish. In turn, when that is dry, the plate is soaked in water, the sugar in the solution dissolves in the water , and if all goes to plan, the varnish covering the painted areas lifts off, exposing the metal ready for etching with acid. The varnish usually has to helped off by brushing with a feather, or more often scrubbed with a paintbrush ! 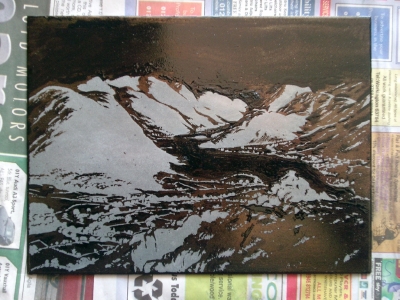 The plate with the brown varnish, which has lfted from the original painted areas to expose the zinc - now ready to place in a tray of acid to begin etching a tone into the plate. 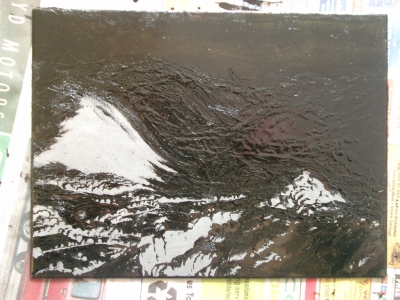 Areas you want to print as pale tones are painted over with varnish (or 'stopped out'), leaving only the areas to be etched deeper (darker on the print) exposed for the next period in the acid. 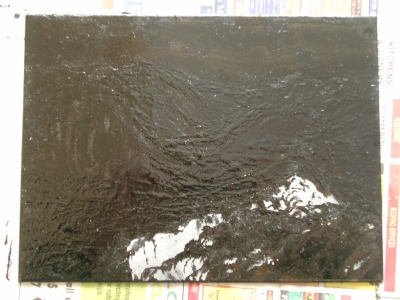 Depending on how many shades of tone (light to dark) you want, the plate may be in and out of the acid, with stopping out after each etch, several times, say eight or ten stages for a subtle image with many gradations.

To get the plate up to the stage need for this print another layer of 'aquatint' has been applied and etched to several more degrees of tone. Aquatint is actually a finely powdered resin - it is sprinkled onto the plate until a uniform covering is attained, then sticks to the metal when the plate is heated with a flame from below. When etched ,the acid acts around the fine paricles of resin stuck to the plate to produce a texture sufficient to hold ink in the printing process. To produce a very pale 'wash' effect requires only a few seconds in a relatively weak acid concentration, with the ultimately darkest areas needing several minutes in total.

An etching plate ready for printing 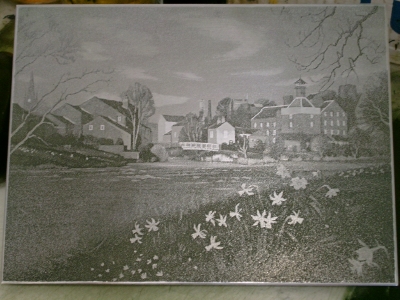 The plate for 'The Barrel Bridge, Cockermouth'. 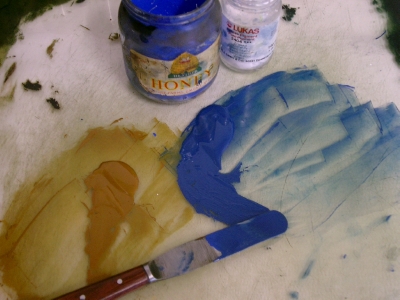 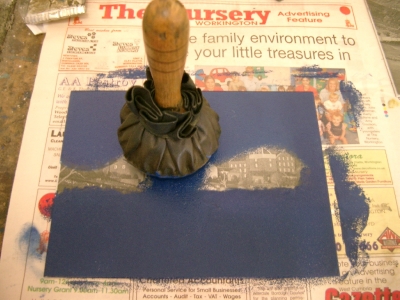 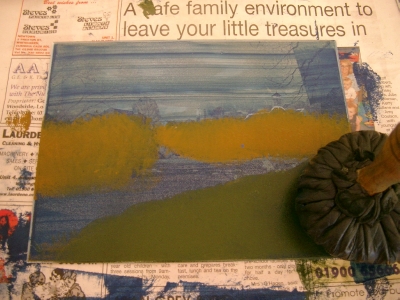 The blue ink has been worked into the plate, then the excess ink scraped off the surface with a piece of card so as not to scratch the metal. Now the ochre colour is dabbed on. 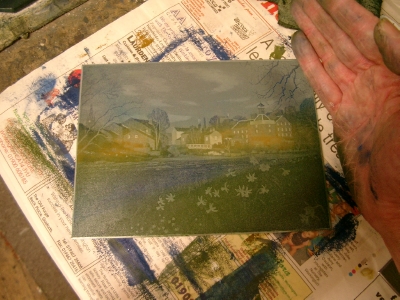 The excess ink has been wiped off the surface to remain in the 'cracks', or texture in the plate. The wiping process requires control and is done by skimming the edge of the hand over the plate - a fine powder known as 'whiting' is rubbed into the hand first to better take the ink. Many effects are possible with variations in the wiping process that contribute to the look of the print, and which account for the individual variations in copies from the same edition. 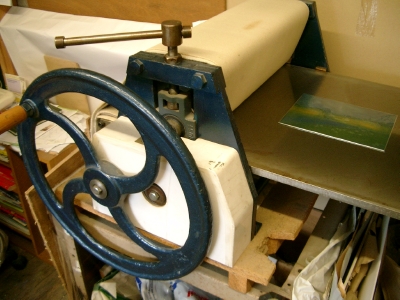 Here's the plate laid in position onto the heavy steel 'bed' of the press. 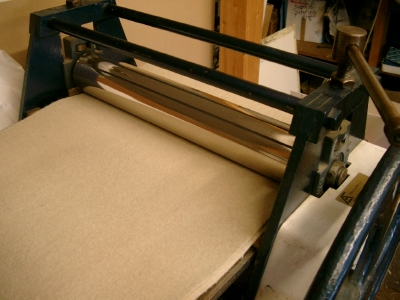 The paper ,having first been dampened by soaking in water then blotted, is laid in position on top of the plate, then the blanket, one end of which goes between the rollers of the press, is gently laid flat over the paper - When passed between the heavy steel roller and the bed of the press, this will push the softened paper into the cracks in the plate so lifting out the ink. 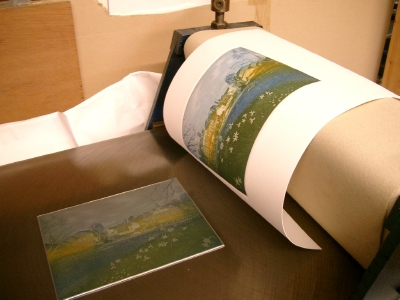 The paper is peeled back off the plate after going through the press.

The plate has to be inked up all over again to take another print. A large plate with more than one colour can take twenty minutes or so to ink up - all copies of an etching are slightly different, and are finished off by individually numbering and signing in pencil when they're dry. The artist writes the numbers like a fraction, e.g. 1/ 60, meaning the first copy in a run of sixty. This is what is known as a 'limited edition'. After the last print in the run is taken, the plate should be 'cancelled', e.g. by drilling a small hole, so preventing any further copies being taken outside of the edition.